Climbing in the Warrumbungles

Another early start, we had a brew and grabbed our gear, headed for Crater Bluff. Adam won the rock off so he led the first pitch. The route starts very chill for 90m or so, after which you’re on the rib proper. With its choss and exposure, route finding was a bit of a challenge as you’re mostly just looking for gear, a lot of which is marginal, but for the most part it’s not too bad. 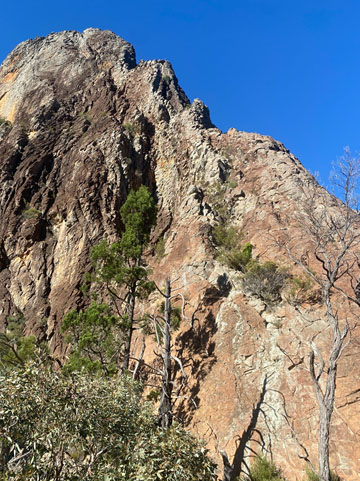 The pitch or two after the crux are a house of cards. It’s mainly made up of a bunch of loosely consolidated blocks that all sound hollow. It felt like if you fell your gear either wouldn’t hold or it would pull half of the mountain down with you. At one point I thought the route went left but Adam said right. He’d been looking at it for longer than me so I went with him. It was the wrong way to go, I couldn’t get gear in, and the climbing was terrible, so I delicately downclimbed and went around the other side. Right away I found signs of wear on the rock and gear. Classic sandbag sando.

I got through that pitch and Adam smashed another 30m or so to the top. It was quite the view from the summit and the descent was similarly inspiring. We rappelled off the summit down into what’s called the green glacier, a deep gully carved by water and erosion bursting with life, lush and green: Descend that for about 20 minutes before you rappel down onto a terrace, skirt that terrace for 100m or so to rappel again onto another terrace from which you can downclimb. Epic stuff. 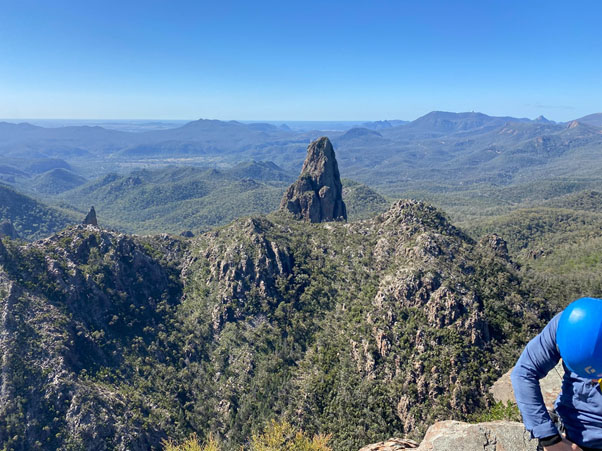 The evenings at Balor Hut were another highlight. We spent some quality time sitting around the fire getting to know a different group of hikers and climbers each night, exchanging stories and having a laugh with some interesting and friendly people. This is a memory that will stay with me.

Knowing your physical and mental limits

With Phoenix lined up the next day I started having serious doubts. We were committed and I didn’t want to let Adam down, nor did I want to back off the route, it was going to be the culmination of a lot of climbing for us, but I just couldn’t get psyched, no matter how hard I tried, no matter what I told myself, I didn’t want to climb the next day. By the time my alarm went off in the morning I had resolved that I didn’t want to be going up such a serious route feeling anything less than my best and I told Adam as much. We agreed to go and get on the first pitch or two to see how we felt once our heads were in the game.

We hiked in without event and I started up the first pitch, at the first steep section where I would have to pull on some fractured blocks to surmount it, I couldn’t commit. I backed off which isn’t something either of us have done; we have always had an unspoken agreement that regardless of what you come up against you finish your lead. I wanted to start further left but Adam wasn’t having it so I told him to lead it. He climbed the first pitch in a good style, which was long and fairly stiff for the grade, but decided to bail regardless. I seconded to a set of chains and we rapped off. Adam was disappointed and angry and I agreed that he had every right to feel that way: Adam is a really motivated guy and this was going to be a big feather in his cap. If we had both been locked on we would have sent the route for sure.

On the walk back and throughout the afternoon we did our best to figure out what happened and why. Eventually, we agreed that it was largely due to mental fatigue. At that point in the trip, we had been climbing progressively harder, longer, and more committing routes daily for three weeks. Our only rest days consisted of long drives, and I was fried.

We decided that this was a valuable lesson and that we had done well to get as far into the trip as we had without this happening already. A couple of rest days were needed to regain some psych and just to let our brains function without any stress for 48 hours or so. We spent that afternoon and the following morning eating all of our food, reading and napping. The weather was perfect, allowing you to lie in the sun and feel as though you had a nice warm blanket wrapped around you.

The following afternoon we hiked back to the car for showers and beers, blissfully reflecting on our trip so far. We were both relieved that we had survived our stint in the Bungles without incident.

Climbing in the Blue Mountains

The next day we went to the Blueys and at the recommendation from one of our new camp buddies stayed at Mount Wilson, while we climbed two big routes at Pierces Pass. The first day we romped up Bunny Buckets in around five hours car to car. The next day we attempted to onsight Hotel California.

I wanted to block lead and started first with the crux pitch. It was stiff and I couldn’t achieve the onsight. I did onsight the remaining four pitches of my block though which I was satisfied with. Adam’s block started with the famous traverse pitch; I’ll admit I was a bit gripped seconding it. 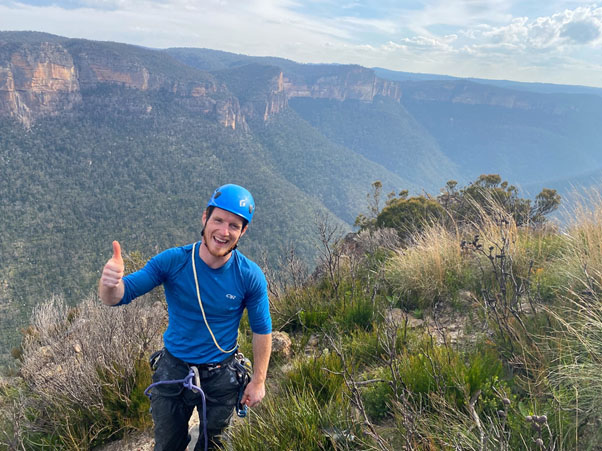 Now for the most part, I could relax all the way to the top even though it was steep and challenging climbing. We topped out the route incident-free having pulled on a few draws through a couple of Adam’s pitches; except the traverse, which he did onsight. Fatigue was creeping in fast, and we both wanted off the wall, so we gunned it, and threw style out the window. It was seven hours car to car for Hotel California. That was over 600m in 2 days, most of it 18 or higher and we were absolutely fingered.

After a couple of days of rest, we finished the trip ticking more classics at Mount Piddington, which became one of the highlights. We had a solid list of 3-star routes like The Eternity, Psychopath, Amen Corner and The Janicepts to name a few. We managed to onsight almost all of them, feeling strong, confident, and efficient after so much trad climbing. It was a glorious couple of days and a great way to cap off the trip! 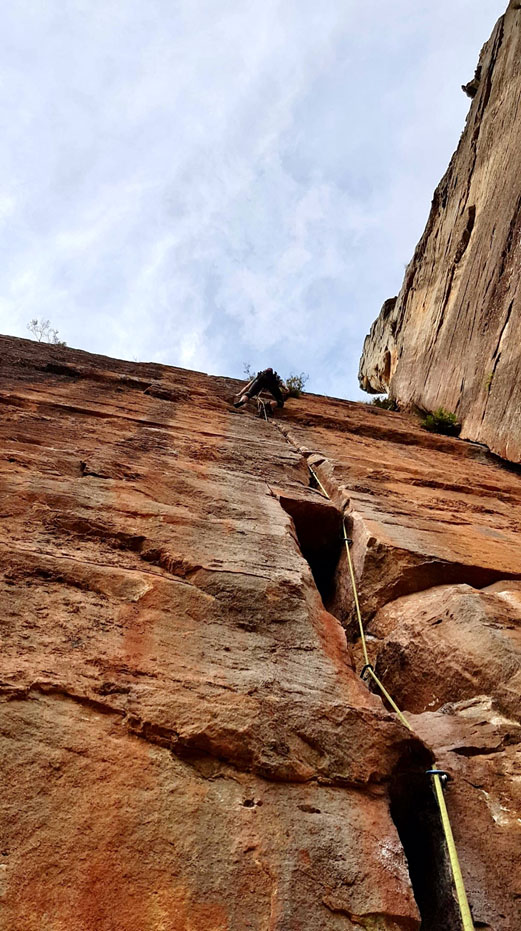 As I write this now, I’m feeling quite optimistic for this year’s Frog season and I’m keen to try hard on some sport routes around the place. But mostly I’m just keen to go home, eat heaps of food and chill out.

Want to read more multi-day adventures by the K2 Base Camp team? Check out the trip notes from The Thorsborne Trail or Carnavon Gorge.