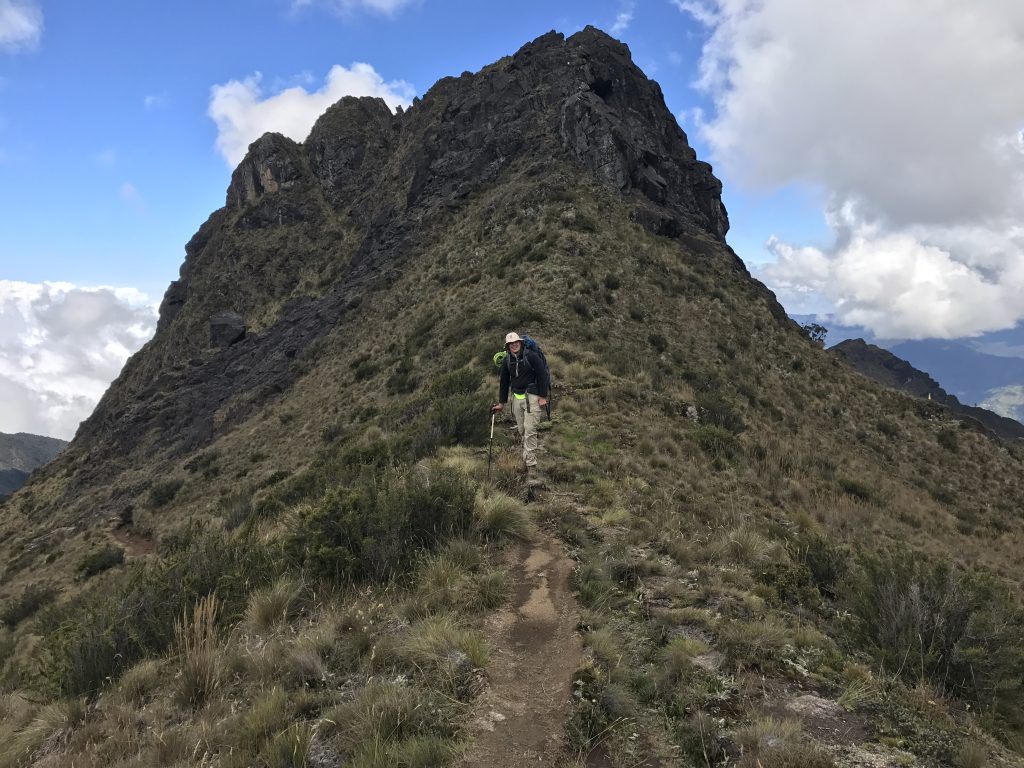 “Are you mental?”, “Why would you do that?”, “You guys are crazy!”, “Try not to get eaten” – These are all things you hear when you plan to summit Mt Wilhelm in remote Papua New Guinea.

Mt Wilhelm has always been on my list of mountains to summit, but when I read that in 2016 a German team had pioneered a technical climbing route to the summit, appropriately named “Kammoro Dumara” (Where Earth meets Sky), I thought - “I have to climb that!”. This started 3 months of planning that culminated with my partner and I standing on the highest point in Oceania on 10th August 2017. The trip took a lot of planning and threw us a few logistical curveballs, but it was an adventure well worth the effort.

This adventure was really made up of 3 parts, so below is my 3-step plan to summit Mt Wilhelm!

Despite the stories, this political drama didn’t seem to be affecting our journey - until we reached one of the bridges in between the two fighting villages. I use the term “bridge” loosely because at the time we arrived it was just a random assortment of timbers and steel beams that resembled a game of Pick Up Sticks. It was clear a toll and the right connections were needed to get across as the locals were using the bridges to prevent movement between certain villages. Fortunately, Betty is a well-known and respected figure in the region, so after some words from her and a few kina to the right people we were on our way again – after first jumping up and down on lengths of timber to test strength. This process repeated itself a few times in what I can imagine is quite a lucrative business for the locals.  Eventually we arrived at Betty’s Lodge in the late afternoon and started getting ready for the next stage of our adventure: the walk to Base Camp. Our plan was to walk to Base Camp and camp for one night to acclimatise, before spending two nights at High Camp near the base of the summit climb. 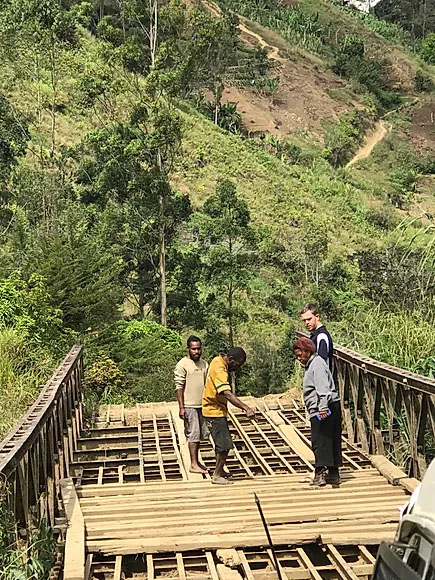 Luckily my body started to behave and I managed to keep some food in and sleep the night through.  Waking up the next morning I felt like I had been given a new lease on life. I was ready to take on the world, and that we did!  The morning started with a hike up to “Plane crash ridge”.  A point where a World War II plane had crashed into the ridge and the wreckage remained. Here, we got our climbing gear out and did a small little climb to test the gear and acclimatise to rock climbing at that altitude (3900m).  In hindsight, this was probably the smartest thing we could have done as it gave us the confidence needed to overcome the obstacles that where to be thrown at us during the summit attempt.

Setting up our tent at high camp (4200m) was a little bit surreal.  Perched on the only section of flat ground for miles, our small little orange tent stood out amongst the huge ridges and peaks around us and gave us panoramic views down the valley.  It was here that I was truly hit by the remoteness of our situation.  10 hours walk from the nearest road, and a further 4 hour drive from any form of city or town. We really were in the middle of no where… 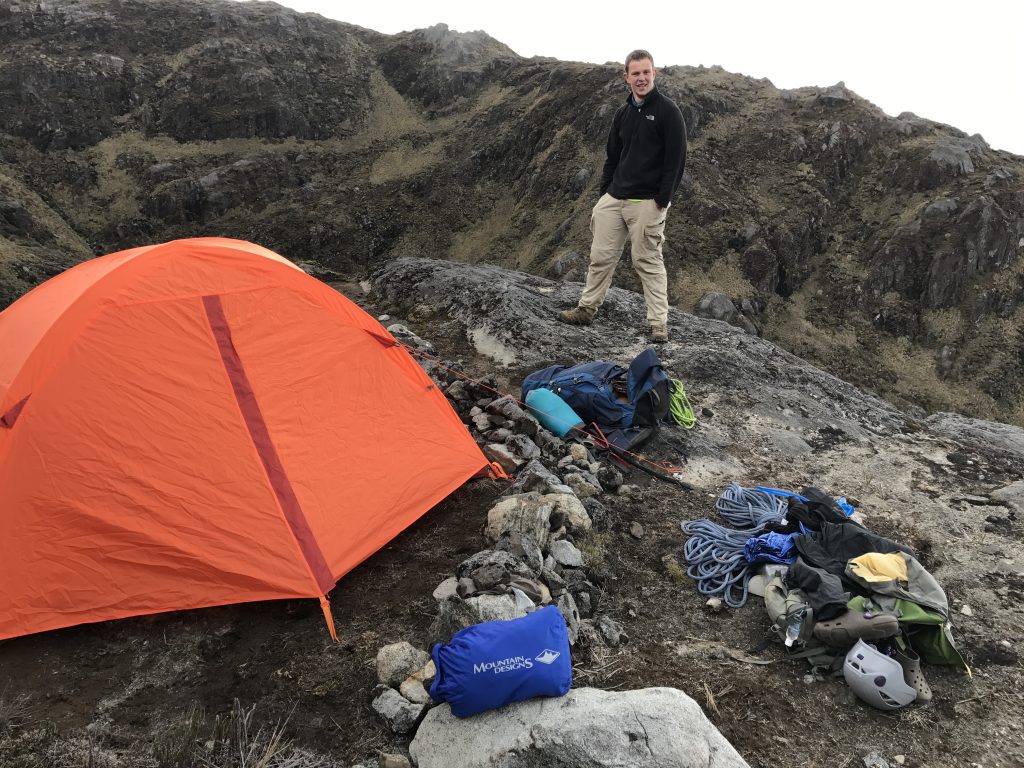 It’s amazing how, despite the best planning, sometimes things just don’t go the way you had planned and you have to overcome obstacles that you had never even considered.  This happened to us… and this obstacle was fog. We woke early and walked from high camp to the base of the summit climb. Walking past plaques of people that had passed away, and the body of a local man that was lost to the mountain made us realise that we were in unforgiving terrain and gave us an appreciation for what we were about to attempt.  Reaching the base of the climb was incredible as it was the first time we had seen the summit - and the rock that we were going to attempt to climb!   The problem was, we couldn’t ACTUALLY see the summit.  We could only see about 3m above us looking towards where there should be a summit.  Thick fog and cloud had blanketed the whole mountain and left us in a sea of white.  A sea that we were not sure we could climb out of.

We sat at the base of the climb for about half an hour waiting to see if the fog was moving and would clear…. It was at this stage that we started getting cold and thought “Bugger it, let’s just climb anyway”.  I am so glad this was the decision we made because the fog was there to stay and if we had continued to wait it would have ruined out summit attempt.  So we began to climb!

The climbing itself was not technically difficult. If this same climb was here in Brisbane, I would have been up it in a flash without cracking a sweat.  Unfortunately for us, we were not in Brisbane, but were 4400m up in the sky, in freezing conditions and reduced oxygen. This made the climbing a lot harder and a grade 13 -16 lead climb took all of my concentration to get to the top. When climbing, there where points that I couldn’t see my partner, she couldn’t see me, and I couldn’t see the next point that I was climbing towards. The fog seemed to get thicker as we climbed, but this only added to what was a magical experience! At about 11am on the 10th of August we became the 1st Australians to ever summit Mt Wilhelm via this route and the second team ever.

Our summit via Kammoro Dumara would not have been possible without the support of Betty and her staff, including our incredible guide Toby. A huge thanks also goes to the German team who set this epic route, to Naden and Skyvan from Port Moresby and of course to my beautiful partner Kat for joining me on this madness!